As theatre people, we are fascinated by the inescapable confrontation with victory and defeat. This was our starting point for Sweetheart, why did you lose?
The performance revolves around the ironic absurdity of winning and losing, and how both of these exert excessive influence on our self-esteem and on the concept of success in our culture.
The realisation of this show came about through a series of meetings and rehearsals that took place between the creators at different times, with fairly radical differences in the external conditions and in very changeable weather conditions. The first part of the work evolved in the open spaces, in the wild nature and amongst the dilapidated houses of the Tenuta Dello Scompiglio, giving life to an itinerant performance using and developing everyday sounds and materials, sometimes in contrast with the outdoor environment.
This body of work is now being brought back within the theatre environment, where it is confronted with the possibility of other characters and other performers and with technologies such as video and electronic music.

director's notes
Description of a dead-end street.
Two people, both over 40,
no longer at the height of success.
They have 50 minutes to prepare for their big comeback.
They have to win.
Or may be not?
The temptation is great, the moment of triumph a delight.
And what would happen if they lost?

Two angels fall straight into a mincing machine.
Screams and shattering. An exhalation of fear.
Day after day, they will try again
Until death will redeem them.

participants' notes
A mobile, tragicomic installation on stage,
a sequence of images of two skaters on the ice,
but where the ice is no more.

A body, alone on the ice, alone in the rain.
Alone with the nightmare of defeat.
It falls into the water whilst dreaming of dancing on its surface.

Someone is dancing on the ice: tracing out sharp tracks
- like the flow of life - with marks and scratches, scars and wounds,
on that vast smooth surface.
And medals, trophies and prizes twinkle in the distance.
Will it be defeat instead? Who cares? Who dares?

We 2
Everyday actions in an absurd condominium.
Isolation and symbiosis - separated and united
by Radio Gogo, which we all listen to.
In the habitual actions of awakening,
memories - and images of memories -
blend together.
A jumble of times.
Success - being loved.
Failure - being rejected,
they become our own inner voice commenting on us,
-relentlessly-
as though keeping at bay the spontaneous action of the moment.

Technical Requirements
Theatre premises for 4/5 days for the installation of performance lighting in the case of a debut.
Minimum size of the stage: width: 8 m; depth: 8 m; fly loft height: 5 m 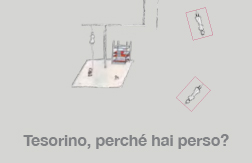 Tesorino,
perché hai perso?
appunti
(Sweetheart, Why Did You Lose? - a Journal)