Trilogy of Absence comprises of three performances that interact and engage with the theme of losing and winning, its relationship with time and in all its different dynamics, in and out of reality. The question is addressed from different perspectives and develops in different spaces and places of the Tenuta Dello Scompiglio estate.

Tesorino perché hai perso? (Sweetheart, Why did you Lose?) takes place in the Performance Space, in a face to face relationship between actors and audience.

Riflessi in Bianco e Nero (Reflections in Black and White) is a journey in four stages focused on loss and memory, that winds through various locations of the Tenuta, moving between action and installation, where the public and the performers sometimes end up mixed together.

Kind of Blue, the last part of the Trilogy, took place in one of the underground exhibition rooms. The audience watches everything from the top of a scaffold: at the same time as the video shots, in a live scene, there are a turret and an astronaut.

An exhibition-installation of pictures, objects and images used during the preparation of the trilogy was mounted in the mezzanine of the Performance and Exhibition Space. Four issues of a journal on the Trilogy of Absence containing notes by Cecilia Bertoni on her work in creating the performance are available at the bookshop, to browse or for sale, as well as the catalogue of the works included in Cimitero della Memoria. 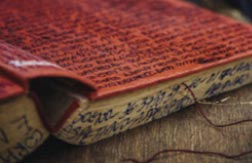 (Kind of Blue, Him and Her, A Man Alone)