The exhibition that inaugurated the training and exhibition activities of the Accademia Dello Scompiglio was assigned to the artist Alfredo Pirri, who also set up the first seminar of the Accademia in May-June 2009. The first book in the 5 volumes of the Dello Scompiglio series, “Incontri d'Armonia” is a record of the exhibition activities, including Pirri’s solo exhibition and the group exhibition. The Chapel, an integral part of the Dello Scompiglio estate, plays a key role in the symbolic system around which the estate was traditionally structured. It represented the religious perspective and tended to uphold the political perspective represented by the villa. The principal entrance faces the old link road that runs parallel to the wall and once welcomed pilgrims processing in religious festivals. The work, conceived by the artist specifically for this space, consists of a walkable glass floor, the depth of which contains a large number of vivid red coloured feathers. The feathers, reflected on the white background, create a luminosity that transforms according to the movement of the sunlight. It is as if big glass windows had fallen to the ground after a collision with a flock of birds or angels, and were arranged to leave a sign of this impact as a background to our light and dangerous footsteps. 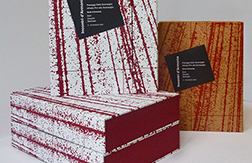