The Tenuta contains within it an eco-mosaic of forest, scrubland, heath, shrub, grassland, uncultivated land and orchards, favouring the presence of a wildlife community rich in flora and fauna, with rare species of conservational interest. The precise composition of animal and plant communities was the subject of a preliminary investigation in spring-summer 2008, which provided the basic guidelines for a programme of works to improve the environment for the conservation of species and habitats and for the protection of areas particularly affected by the presence of protected or sensitive species.

The results of the preliminary census indicate the presence of a large number of flora and fauna; at least 200 species of wild plants, 45 species of birds, 12 species of mammals, 8 species of amphibians and reptiles and over 20 species of butterflies. Among these are numerous specimens of conservation interest (green woodpecker, cattle egret, horseshoe bat, orchids of the Serapia genus etc.), most of which take advantage of the mosaic of environments currently present.

The presence of certain species is closely related to a specific environment: the pond plays a fundamental role for the amphibians (spotted newt, green frog and Dalmation frog), at least during the breeding season, between late winter and summer, when they are dependent on this environment. Similarly, the osmund fern, a protected species and listed as one of the most important species of the ZPS Monte Pisano, is linked to small puddles or trickles of water. This is a species whose origins date back many millions of years and which today is considered a relic of the European flora of the Tertiary. Also precious is the presence of horseshoe bats, swallows (for which a specific conservation project is intended) and barn owls, that shelter in the abandoned houses or the ceilings of occupied houses.

Swallows are very faithful birds and every year in spring they return, punctually, to build their nests of mud and to reproduce, always occupying the same place. At the Tenuta Dello Scompiglio there is a colony of swallows that nest in buildings that were once abandoned. In spring 2007 we began a project to conserve suitable nesting sites and also to compensate for the impact that the restoration of these spaces would inevitably entail. We proceeded therefore to close up the spaces where works would take place during the time the swallows were present, and placed artificial nests in safer locations. The project to conserve nesting sites is still ongoing, and we intend, when the works are finished, to have spaces that can accommodate the swallows in the future, when the structures they once occupied are being used by humans. Swallows are not frightened by man, with whom they have learned to coexist, in fact, even when people are present, the swallows emerge from small openings and begin to build their mud nests, preferably attached to the internal walls of buildings.

The Collina dell'Uccelliera (Aviary Hill), which previously was planted with olive groves and vines, has recently undergone work to prune and clear the shrub layer (above all bramble) and diseased plants and trees, in order to enhance the area from both environmental and landscaping aspects. The cleared ground of this area is currently devoid of vegetation, giving the opportunity to observe the development and the evolution of the flora and fauna during the coming months and years. The monitoring will allow us to plan further actions and local environmental improvements while at the same time add to the enjoyment of the area. In order to observe the effects of our actions on the development of the flora and fauna, it is preferable to continue the monitoring for a minimum of three years.

"We intend to continue to monitor the wildlife and the vegetation, focusing our attention on the Collina dell'Uccelliera (Aviary Hill) which has been completely cleared of the brambles that once covered all the terracing. The main purpose is to document how this change influences the animal community and vegetation." 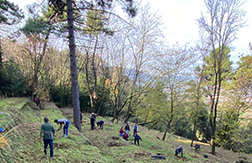