Two somewhat contradictory realities coexist within the Tenuta. One is the centuries-old architecturally and artistically designed park with fountains, nymphaea and a large variety of trees of majestic proportions. Through diversification, many animals inhabit the area. The other is a forest invaded by pines. In the shade of the highest pine trees are found yew, rowan, chestnut, oak, holly, ash, broom, juniper, cherry trees, which, lacking space and light, grow in straggling forms. A project has begun to regenerate the forest and promote diversification through the gradual thinning of the pines and through the care and protection of other species and the planting of new trees. The woods of the Tenuta and the flora and fauna are monitored and a census taken of the species present to increase in biodiversity.
The wood that is obtained by thinning the woods is used to feed the woodchip boiler.

The cultivation of olives and vines, orchards and vegetable garden are the main activities in this field. The olive groves and vineyards were covered by brambles for many years. Partial recovery of the olive grove has begun through pruning, organic and biodynamic treatments, and the addition of new plants. Oil is being pressed every year.

The 5 vineyards are situated in various microclimates of the Tenuta. The "Vigna Madre" (Mother Vineyard), the first to be "liberated" from the brambles, still consists of original and native vines: Colorino, Canaiolo and Sangiovese. The wines that result from processing of grapes - Lavandaia Madre, Lavandaia Bassa, Lavandaia Pura - are produced directly in the cellars of the Tenuta.

With regard to the vegetable garden, we organically grow local varieties and patially produce our own seeds, enhancing the tradition and diversification. All the produce from the land supplies the restaurant of the estate - Cucina Dello Scompiglio - or is directly sold in boxes to the direct customers. 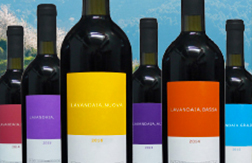