The installation Camera #3 (Chamber #3) concludes a path begun in 2011 with the second stage created in 2012, in which two women question their own identities. A bedroom into which the visitors are invited to immerse themselves in an allegorical prison to distance themselves from daily life and enter a world filled with the references, evocations, memories, fears and dreams of two women enclosed within their own solitude.On the one hand, a physical, and moreover a mental, cage constructed using thin strips of wallpaper that illustrates a clear boundary between the coming of everything happening outside and a time that remains inevitably suspended internally. The story of a physical imprisonment, that drags with it obsessions, emotional obligations and thoughts, drawn through the weaving of fragments, the dislocation of the elements and the diversification of levels of interpretation. The narrative diary of an absence that pervades throughout the room in elements such as the bed, the pillows with sketches imprisoned between the fabric mesh and the embroidery, the table on which are innumerable memories and attempts to escape, the calligraphy of different signs, a picture closed up in the aquarium or the chair with books waiting to be leafed through. On the other hand, the solitary, evanescent and powerless presence trying to enter this prison whispering her own identity through the fragmentation of her body in images concealed by glass or protected under a table, a space overflowing with earth crammed with miniature new born babies and videos in which she seems trapped in the walls of the room or suspended in the environment. A presence just within sight, but which disappears as soon as you get close, remaining at the periphery, trapped outside the web. The need to ask questions relating to the role of herself in the context in which she operates, showing the body as a shell of memories and experiences that emerge stealthily, delicately, without ever succeeding to definitively burst in.

Together, they create an atmosphere in which the serenity of vision clashes with the complexity of thought, the calm effected by windows with the turmoil of the surroundings, and the intermittent sounds from the world outside with the noises heard inside. A piercing encounter in which the demographic, social, economic and cultural differences of the two women are negligible, and which winds through a place to escape from or adapt to. An externalisation of physical or mental prisons, past, present or future, that belong to us more than anything else and which none of us can forget. (Angel Moya Garcia) 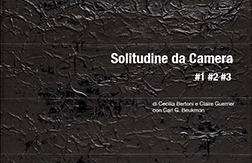 BY CECILIA BERTONI
AND CLAIRE GUERRIER
WITH CARL G. BEUKMAN
2014 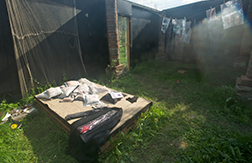 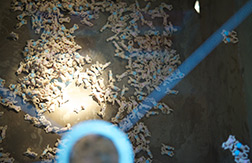