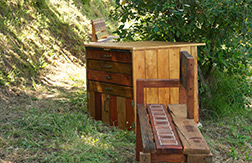 In sosta (In pause)
BY F.MARQUESPENTEADO

The work In sosta is a part of the permanent installations in the external spaces of the Dello Scompiglio estate.  The making phase involved the collaboration between the artist and a considerable number of staff divided into three groups (archaeology, understanding and garden) through the embroidery, the construction of the objects and the design of the garden surrounding ...