The work consists of a sound installation, totally invisible, situated opposite one of the natural portals of the property. When the visitor passes through the portal they will hear repeated tapping. The sequence they will hear will be random in duration and rhythm, but also in the type of sound. In the woods, waiting and without apparent reason, one hears tapping. Who is it? Where is it coming from? What does it mean? What threshold does it indicate? The sound is like the simplest and yet most enigmatic action. By its very nature and in particular the sound selected, on the threshold of perception, it can be heard only if one pays attention, remains on the edge of presence and absence, an invitation to stay on the threshold and hear more and their differences. An invitation not to think of the space as a void to be conquered by a colonialist that cancels out the other, but to listen to that vibration that resonates in the void (returnable). 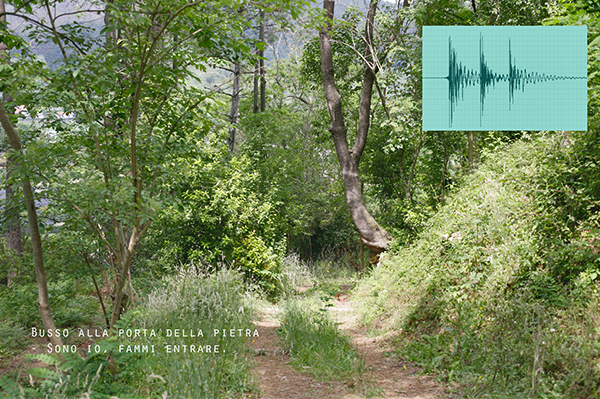 Valentina Lapolla was born in Prato in 1979 where she lives and works. Valentina Lapolla’s work, conceptual in form, develops in a constant dialogue with reality; particular attention is focused on the relationship considered essential in the determination of the self. She began her work with the group SenzaDimoraFissa, a workshop begun in Prato in 2006 from a project by Andrea Abati and which recognised artistic practice as a means of contributing to the definition and formation of a society in transition. She continues her work in video, through photography, performance and installation and through collaborations with the theatre and dance worlds.